Posted at 17:09h in Cartoons by Frieda Vizel 2 Comments

With many apologies for the delay in announcing the winner of the all-mighty cartoon caption contest for the sacred month of September, we at the New Dorker want to head right for our towels and get this ceremony underway. Ahem. Right, not very professional is I, being as this whole thing got farshlept. Well, the main thing is I’m here now with the finalist and winner after a very busy few weeks of holidays and new-semester workload. Despite the delay all the great prizes and honors will still be awarded. Yes, twenty five dollars. No small thing, considering this is the last caption contest with a cash prize — until the next bailout! I will continue to do caption contests, but it will now be primarily for the benefits of amusement of yours truly and anyone else who cares, meaning, there will be a much altered profit definition.
And with that…The runner-up to the caption contest is:

This gave me a real chuckle. I love deadpan humor especially in strange situations! Must. Keep. Trying. Matty. No. Money. Surry.
As for the winner of the caption contest and of the twenty five bucks and the creator of my all new funny cartoon that fits right into my cartoonist’s portfolio-in-the-making:

David: “Why throw out the shofer with the bathwater?” 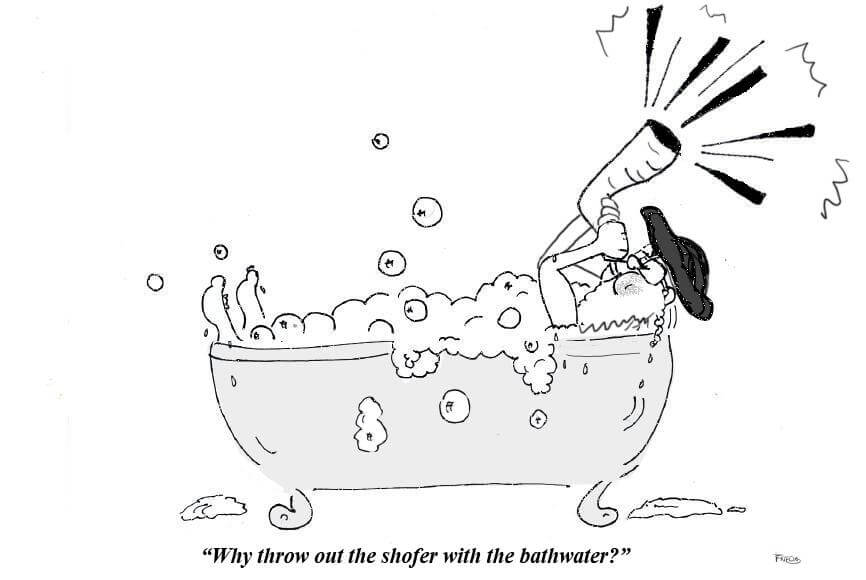 I love the whole bathwater concept because the analogy has been taken in every possible direction, stretched to fit the religious values of every stripe and creed. I always get confused by what the baby is and what the bathwater is, in terms of real life. What counts for the metaphorical baby? Is a pair of jeans a baby? Is a shofer a baby? Is shabbes a baby? Is God a baby? Really? What’s the matter with people taking an analogy and running with it?

From my perspective everyone should do whatever they want with their bath and bathwater, so long as there are enough bubbles to cover up whatever I’d rather not see. And in terms of religion, when people choose to distance themselves from religion altogether instead of staying partially religious as Modern Orthodox or LWMO or such, it is their choice, their preference. Leaving religion altogether doesn’t constitute an act of recklessness or extremism, it constitutes a choice in life.

Caption Contest
On women shaving all their hair
On Jeans