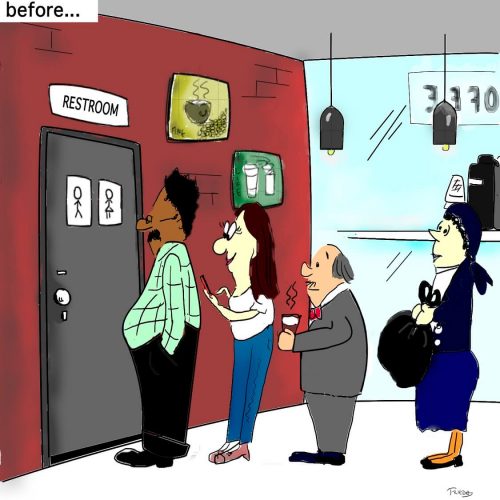 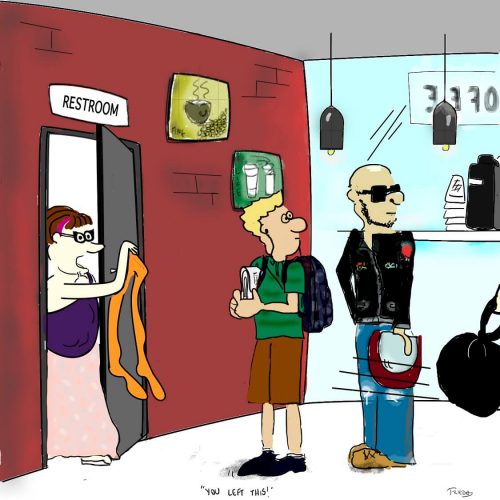 This “True Story” is the result of about twenty hours of work and some very misguided ideas about my artistic capabilities. I thought I’m a major illustrator there for a minute. A minute, no. The delusion lasted twenty butt-stuck-on-chair hours. In my mind it was hilarious. It isn’t.

Well, I kinda could say that scenes of changing clothing in public places always fluctuate between the very funny and the very miserable. I know all too well. I titled it “True Story” because I’ve seen with my own eyes as these things happen, although I’ll be dead in a shpitzle before I’ll admit that it was me I saw it happen to.

Such awkward dress changes happen because it’s the only way those restricted to the religious code of dress can wear hiking pants on a trail or a comfortable dress for a hot day in the city. When we are still officially in the fold, we are confronted with one of two options: dress religiously in a way that are completely uncomfortable in, or humiliate ourselves by pulling on tights and shirts and wigs in the back of taxis and behind poles in the subway and in public restrooms and emerge in civilized society entirely “normal”.

Why is the first option so bad? Why couldn’t I put up with just wearing whatever I wore as a religious woman and face the world as I am? Well, I know some women – proud, gorgeous, self-confident shpitzle ladies – who do it all the time. They are savvy and smart, and their posture says it all. Unfortunately, not all of us are endowed with these traits. Some of us cave to social pressure more than others. Some of us take on hobbies that require more specific kinds of clothing. Some of us also want to feel that their clothing represents how they see themselves. When I wore the pious clothing, I was treated in a way I felt wasn’t me, like I was a pious nun without a sinful thought. What an insult. I also felt talked down to all the time. If, wearing a Shtrasser’s suit and Gucci tichel I would say to the lady next to me on the Metro North “the creme brulee in Gordan Ramsy’s cookbook is a must try”, she would, instead of thinking about trying the damned thing, look real hard at me and then say “for a Hasidic woman you seem very open minded. Your peers aren’t like this. I can tell you are very open-minded, I can tell”. Pardon me, but if you need an open mind to know about good crème brulee then you’re not using the right recipe.

I’ll never forget that time a headgear disappeared and a wig appeared on my head on the way from Monroe to NYC. I remember walking in Manhattan, plastic hairs sexily flapping in the wind, when I was stopped for directions. It was the first time in my life anyone in the city ever asked me directions. No one, I noticed, ever asked for information when I was in tribal gear. Could it be that it had just been my luck that no one stopped me until now, or was it that now that I looked like everyone else people treated me like a regular genius who has the capacity to comprehend the Theory of Uptown and Downtown? I say it was probably the latter.

It’s clear that clothing is a lot more than fashion. It is a representation of who we are, who we want to be, what we stand for and what we believe. It is important, as much to non-religious people as to religious people. Those caught between worlds are left torn in both directions.

I get very enraged when people call the dress switcheroo hypocritical. I’ve often heard that “changing what you wear in secret is hypocritical. If this is who you are stop hiding, or don’t do it.” That kind of either/or black and white thinking is so insensitive to the nuances of a complex situation some of us are in. There is nothing hypocritical in trying to exercise a little freedom when we can. Hypocrisy means being duplicitous inside. But when we are sure of who we are inside but we are forced to look like someone else, wearing what you really want to once in a while is a creative way of making a small world fit.

ON a different note: I came across in my research this very interesting description of a near similar scene, from Hilary Nussbaum chronicling Warsaw c. 1881:

It was not easy at the beginning for those European-dressed ladies to go out and make their way unscathed through Jewish [traditionally-dressed] districts. They were met each time with hissing, pointing fingers, laughter, jibes, name-calling, threats, and curses, such that many of them would leave the house only in the evening […] with a hat wrapped up and with other articles of toilet, and […] at a prearranged entrance to a street forbidden to Jews, the lady would change her clothes.

One could say there’s a mesorah for changing clothes in public places!