In many ways, I think of Vien’s girls’ school building as an excellent example of the rich and colorful history of Williamsburg. Jewish Williamsburg was influenced by three waves of Jewish immigration. Roughly: I. rich German Jews that settled in the first half of the 1800s, II. Eastern European Jews who emigrated in the years from approximately 1880 until the immigration quotas were passed in 1921 and 1924, and III. post-holocaust Hasidic Jews who came to America from Nazi ravaged Europe. These groups all shaped Williamsburg and made it what it is today, but they did not successfully coexist, and instead replaced each other and built on what the previous group left.

I: The Hanover Club
The Vien building was first the Hawley Mansion and then remodeled for the exclusive Hanover Club. It’s not clear to me what the Club’s relationship to the German Jewish community was, but the building was certainly part of the era in which Williamsburg was an upper-class community with Exclusive clubs, societies and various religious institutions. While I do not know if Jews were part of the club, the German Jews certainly had a presence on the rich Bedford Avenue. Temple Israel of The Union Temple was only a mile away from the Hanover Club and was built in 1891, only a year after the club was organized. According to Brownstoner “Temple Israel was a vital part of the German Jewish community in Bedford for another twenty-some years.”

Here’s the club on Bedford: 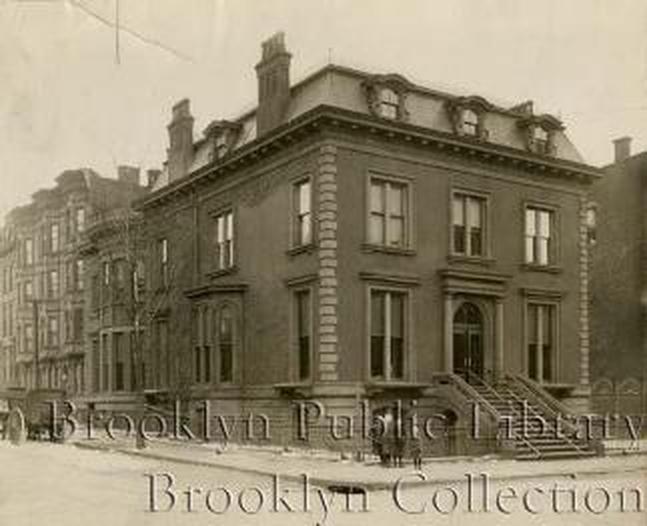 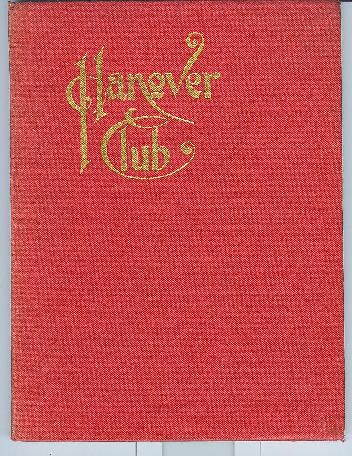 Here’s a little bit about the club, from the Brooklyn Public Library blog:

The club was organized on March 7, 1890.  P. J. Lauritzen, architect, was engaged to remodel and enlarge the “Hawley house,” a  brick mansion that had been the residence of Oscar Hawley, a box manufacturer,  and had cost $70,000 to build. The club house formally opened on Jan 19, 1891 with over 400 members.  During the club’s halcyon years around the turn of the 20th century, aces of the billiard table such as  George F. Townsend and J. Byron Stark put their misspent youths to good account in closely watched tournaments. The club’s bowling alley was generously made available to the ladies during the afternoon hours, and the ladies were also allowed their own cafe, in which no man was allowed unless accompanied by a lady. No opportunity for a good dinner was missed.

“Thumbbit dinners” given around 1901, which required members to wear butcher’s aprons and hats and to eat slabs of steak laid on slices of bread, seem to have delighted the Hanover carnivores. The association’s name must surely have morphed into “Hangover Club” more than once among the wags of the Eastern District.

In any record I found about the Hanover Club or of the time of wealth in Williamsburg, the reader is immediately told that the Club was displaced by the next wave of Jewish emigration. Eastern European Jews poured in from the Lower East Side when the Williamsburg Bridge was built, changing the neighborhood to a crowded and poorer one. The wealthy moved to different parts of Brooklyn and Manhattan.

From “New York Jews and the Great Depression” we get this on the shift from affluent area to lower-class poor neighborhood:

During the 1930s, the Williamsburg community emerged as a center of Orthodoxy. At least fifty synagogues, several Yeshivot, Talmud Torahs, and leading Orthodox organizations such as Agudath Israel and Young Israel made their homes in Williamsburg. 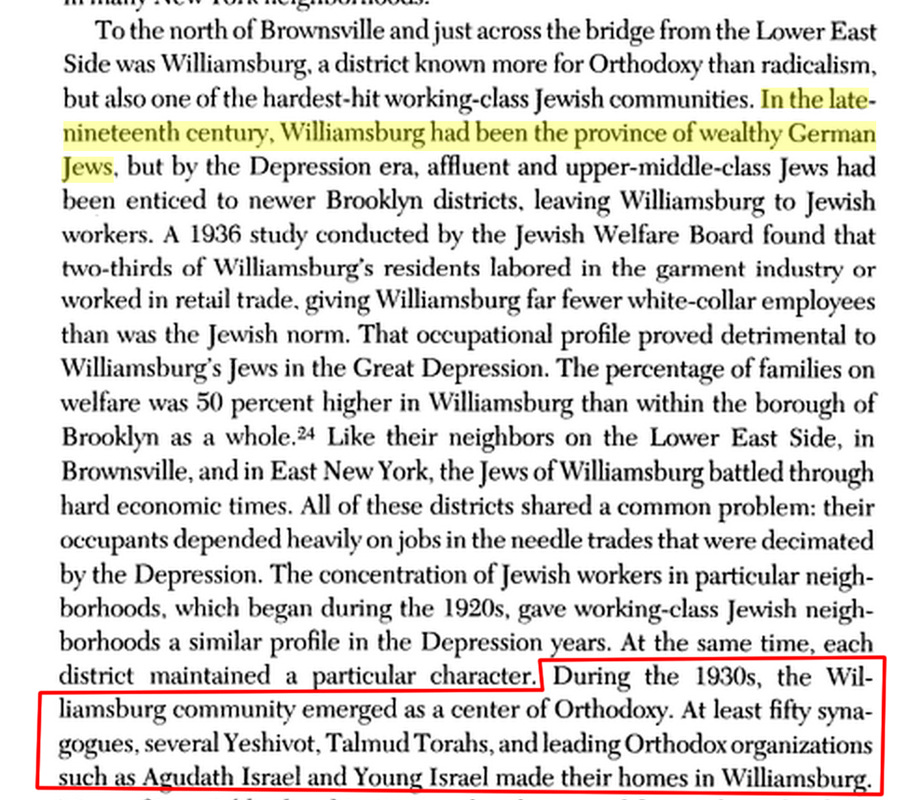 With the shift from the affluent Bedford Avenue to overcrowded lower-class immigrant society in which Bedford Avenue became increasingly “a manufacturing” area, the building in discussion went over to Young Israel. They bought it in 1922 for $50,000. Many people tell me they remember when Young Israel thrived in Williamsburg. Young Israel was a product of the Eastern European immigrant population’s efforts to preserve Orthodoxy in a country that made religiosity a great challenge. Many poor Jews, struggling to survive and feed themselves, had to work on shabbes and eat non-Kosher. Amid concerns of integration and survival, they often dropped the religious observances of their European homes. Additionally, there was a cultural gap between the immigrant population and their American-born offspring. The American children often assimilated or integrated into American society and they did not feel at home in the Yiddish speaking and immigrant religious synagogues and yeshivas. Young Israel tried to answer that problem by offering a more liberal Orthodoxy to young American Jews. In the words of Young Israel:

“To appreciate the role of the Young Israel movement in North America, one must understand the circumstances which led to its creation in 1912 and the forces and events which have influenced its subsequent development. For today’s religious Jews, the conditions under which North American Jewry lived during the early decades of this century are almost unimaginable. Because practically all jobs required work on Saturday, Shabbos observance was rare and typically required extraordinary sacrifice.

The primary aspirations which most Jewish parents held for their children were for economic success and acceptance in American Society, Jewish education was very low on their list of priorities, and as a result, was usually rudimentary, at best. Orthodox synagogues were exclusively Yiddish-speaking and dominated by an Eastern European atmosphere. American-raised Jewish youth who wandered into these synagogues typically found themselves shut out completely. Thus it was not surprising that many Jewish youth of the era generally avoided the synagogue, attending only when required by family custom. Although intermarriage was relatively rare, the loss of young Jewish hearts and minds to Jewish belief and practice as we understand it today was almost universal in that era. It was in this environment that Young Israel was founded by a group of 15 visionary young men and woman.”

(I’m not sure if woman is singular intentionally or in error.)

In other words, Young Israel brought Orthodoxy to a new generation of Jews, creating a hybrid of more modern American elements combined with Eastern European Orthodoxy. One synagogue member, quoted in “New York’s Jewish Jews“, said the partition between men and women was lowered, women were actively involved, and there was a rule against shnuddering! (sh’nadar. Hebrew. literally means he will pledge. It is a process of pledging when called for aliyah)

“It was a very lively service,” recalled one early Young Israel of Williamsburg worshiper. “I took to it very quickly.” The Young Israel, he went on to explain, “was an iconiclastic institution… there were several principals which were almost revolutionary as compared to the synaogues of the day.” Among them: A waist-high mechitzah, “the active participation of women in congregational singing, … the wearing of small tallesim and the rule against shnuddering.” With over several thousand members by the 1940s, the Young Israel succeeded in cultivating a natural constituency for “cultured Orthodoxy.” 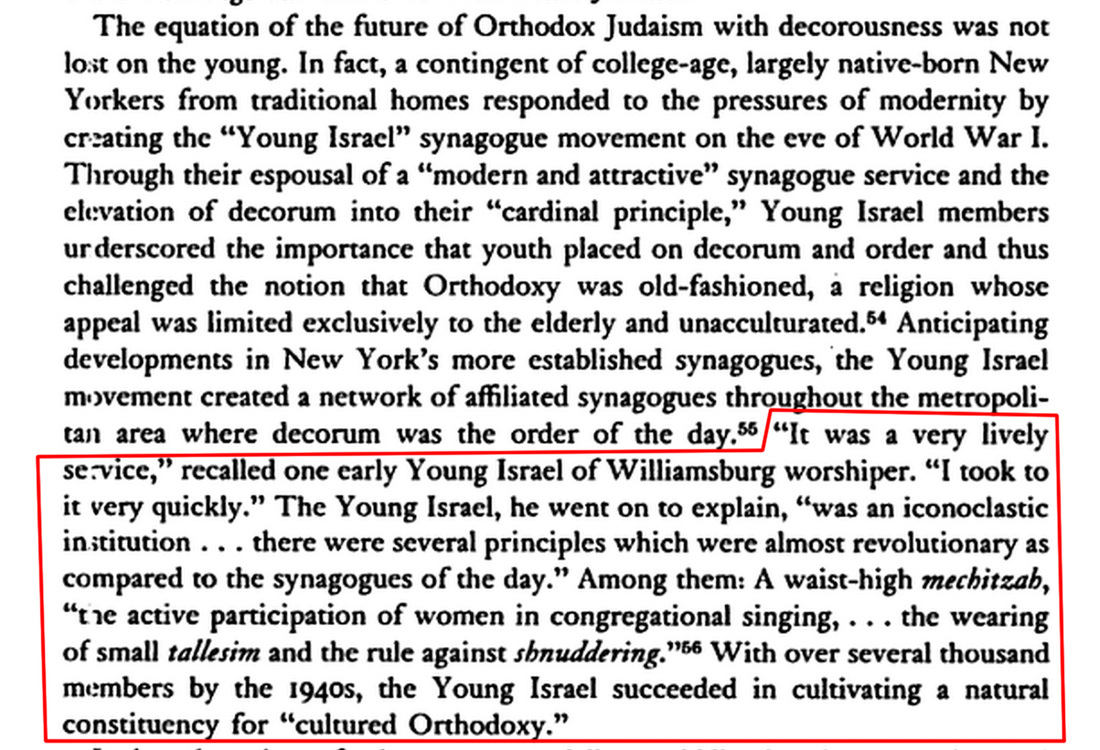 Young Israel’s presence in Williamsburg mostly dwindled when Satmar settled there after the war. Satmar slowly changed the character of Williamsburg from Orthodox to more homogeneously Hasidic. While Young Israel is no longer at this location, you can still walk to the building at Bedford Avenue corner Rodney Street and see that “Young Israel” is inscribed over its door.

III: Congregation Vien
The building is now occupied by the Vien’s girls school. Vien is originally from Vienna, non-Hasidic European territory, and is an excellent example of the ways Hasidism either displaced or influenced Orthodox groups. While many Orthodox Jews left Williamsburg when the post-war Hasidic community settled there in overwhelming numbers, Vien stayed with a significant presence. With time it got to resemble the Hasidic community in many ways. Here’s George Kranzler in “Hasidic Williamsburg: A Contemporary American Hasidic Community”

“Already in the ’50s and ’60s, a growing number of the members of Adas Yereim began to wear kapottes and shtreimels, and the students of their yeshivah, under the guidance of the dynamic rabbi and rosh yeshiva, are practically indistinguishable from the students of other hasidic yeshivot.” 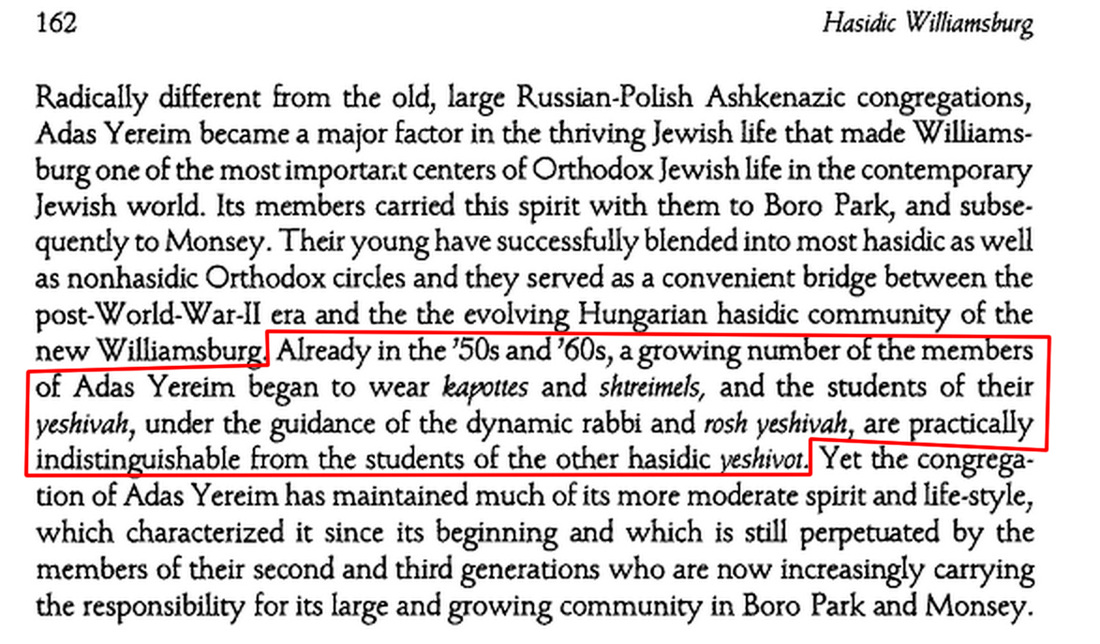 Today, Vien resembles other sects in many ways, and they are one of the groups that make South Williamsburg “Hasidic Williamsburg.”

According to a Facebook friend Esther M. who attended this Vien girls’ school for twelve years,

“The building was fascinating. I still remember when one of the floors was a pretty big synagogue (from Young Israel I assume). In our high school years we figured out how to access the attic and found newspapers and articles of clothing over 50 years old.

“There was also this myth circulating among the students that it used to be one of Rockefeller’s mansions.. We had these elaborate ornaments and fireplaces all over the building. When I was editor of our school newsletter I tried researching it but couldn’t come up with any evidence to support it”

Another friend Rose F. also attended this school and remembers best its attic, which was converted into classrooms. She also notes its beauty, as it was filled with relics of an affluent past.

UPDATE: Pictures of the interior.