It Used to be a Theater 1: Klausenberg Synagogue

Home > On the tours  > Buildings  > It Used to be a Theater 1: Klausenberg Synagogue

The Klausenburg Synagogue at 131 Lee Avenue, Beth Baruch, used to be a small movie theater that had just one screen and 550 seats. Because there was only one movie showing at a time, it seems, from accounts of those who went, that it was a small, intimate environment. It was active from about the late 1920s to 1950. It was first named the Lee Theater and then became Models Theater. The first mention of this building is in the 1921 zoning record in the Bulletin of the Board of Standards and Appeals of the City of New York. The architects Gronenberg & Leuchtag asked for a permit to erect a two story, 39×132 feet “motion picture theatre” on the east side of Lee Avenue and North of Hewes Street. This leads us to where the Klausenburg synagogue is today.

It was the Lee Theater for a while, and this is a little confusing because there was a large Lee Avenue Theater elsewhere earlier, which I’ll write about in part 2. It seems the Congress Club was also located there in the early 1920s, but that history is foggy; it perhaps served as offices. In 1922 the organ for music was installed, as the below picture shows. 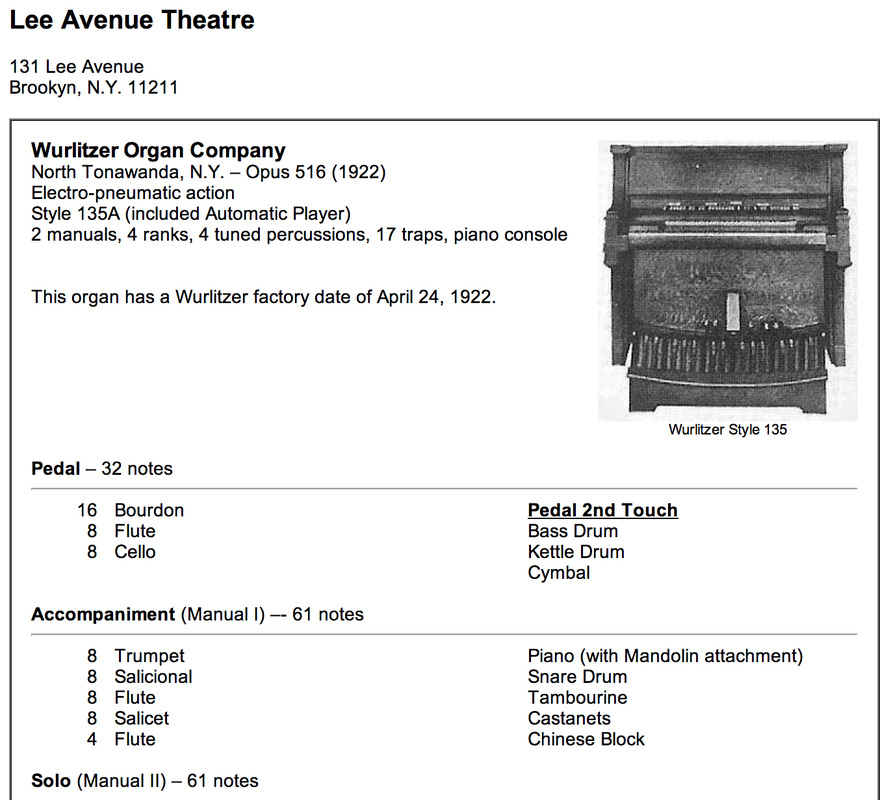 In 1926, the manager of the theater made it into the Brooklyn Eagle newspaper when he was held on $500 bail for appropriating receipts, which he claimed to have done so he could pay the doctor’s bills for his sick wife”

“Joseph Weber of 310 W. 99th st., manager of the Lee Theater, 131 Lee ave., was held in $500 bail for further examination next Tuesday, when arraigned yesterday in Bridge Plaza Court on a charge of larceny. Weber, it is alleged, appropriated receipts totaling about $4,500. Weber, it is declared, took the money to pay doctor’s bills for his wife, who has been ill.” 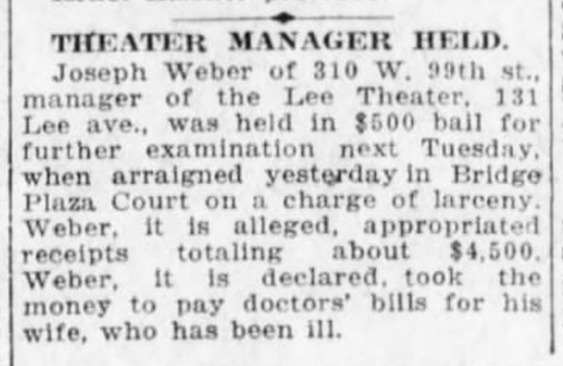 Then, in 1946, the theater was again in the news because it lost its license to admit children due to fire hazards. By this time, you can already see that the same theater, located at 131 Lee Avenue, was called Models Theater.

“Fourteen Brooklyn and Queens movie houses are among 19 which lost their children’s admission licenses because of violations of fire laws and other managerial laxity.

“The licenses were suspended for one and two-day periods, License Commissioner Benjamin Fielding announced yesterday. A total of 67 other theaters and movie houses will be warned today, the commissioner said, following a survey of 86 theaters where 147 violations were discolosed. 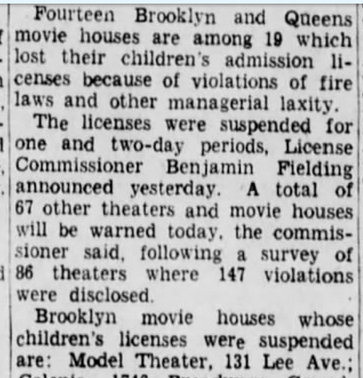 In 1947, the theater made several appearances in the Brooklyn Eagle’s classifieds as they were hiring for whopping salaries of $20 a week. One could even be a “candy girl!”

Philip Fishman remembered the Model Theater in A Sukkah is Burning:

“The Model movie theater had been a highly popular neighborhood institution during my childhood. The Model was a large, old fashioned theater located around the corner from my home, on Lee Avenue between Hewes and Hooper Street. For fourteen cents I and my friends, and frequently my mother, could see a triple feature. I remember many pleasant summer afternoons laughing at the cinema.”

The theater was even sensitive to the kosher laws of the many Orthodox Jews that lived in the neighborhood:

“Before Thanksgiving, the Model  would hold a raffle where they would offer a turkey as the prize. In deference to neighborhood sensibilities it was a kosher turkey. One year my mother won the turkey. She was overjoyed. She told me that this was the first time in her life that she won anything, which, upon reflection, was a rather sad statement.”

Fishman remembers when it shut its doors:

Sometimes in the early fifties, the Model closed its doors as a movie theater and the building was purchased by the Klausenberger Rebbe, Rabbi Yekusiel Yehuda Halberstam, who converted it into a synagogue that is still active today. Needless to say, I was disappointed at this turn of events.

The August 10, 1947 Brooklyn Eagle announced the sale of the theater to an investor:

The Model Theater, located at 131-33 Lee Ave., Brooklyn, has been sold to an investing client of Standard Business Brokers, 8523 Bay Parkway, Brooklyn.

“Plans have also been filed for the modernization of the two story synagogue. Congregation Beth Baruch at 131 Lee Avenue to cost $40,000. The plans have been prepared by Elias Herzog architect.” 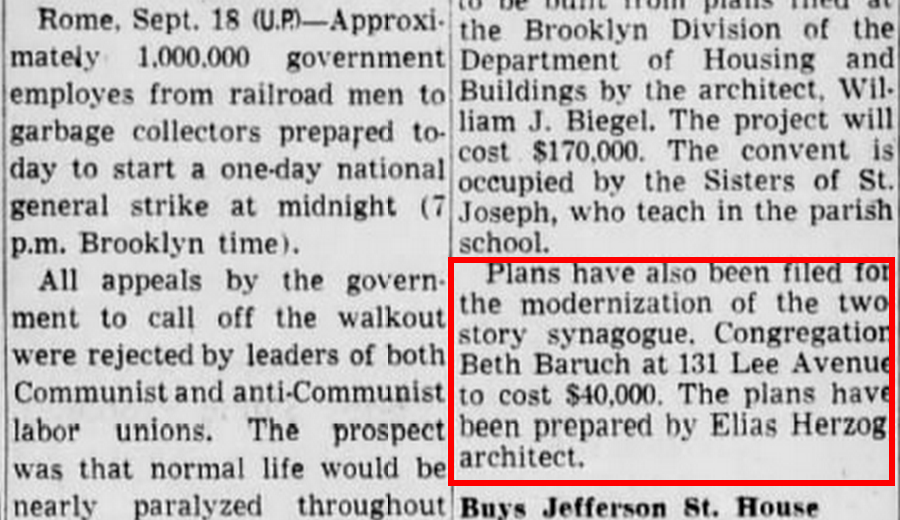 Our ever-faithful photographer, Irving Herzberg, even captured the entrance in 1965! The picture caption reads: “Close-up of doorway and portion of facade of brick building with large sign, Bes Hemidrosh, a house of study of Klausenberg Hasidic group at 131 Lee Avenue in Williamsburg.” 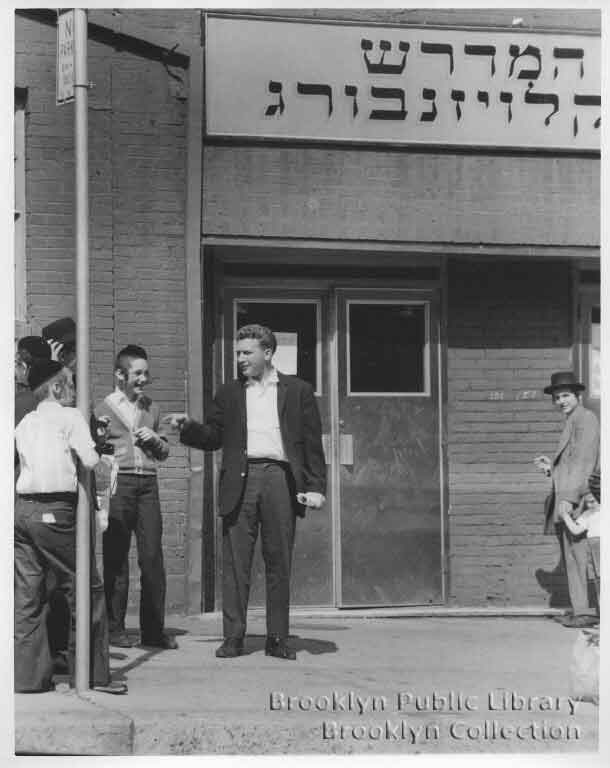 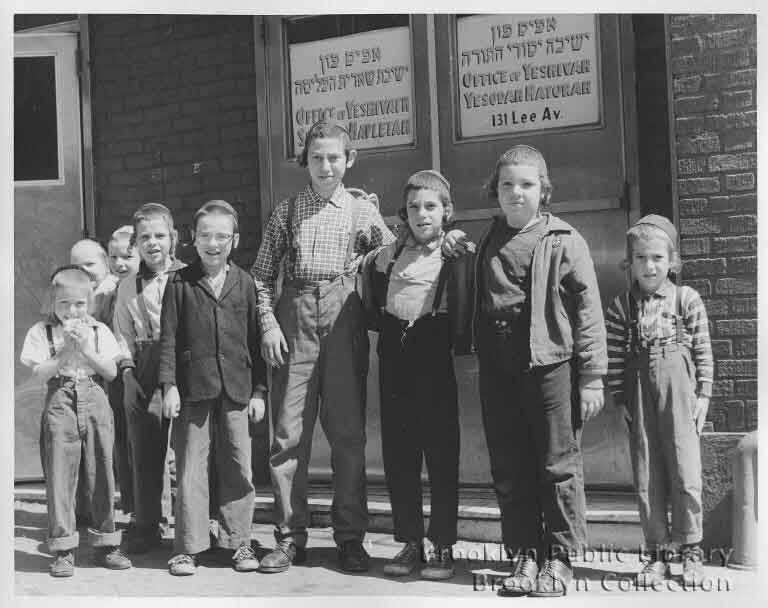 You can see from these Herzberg pictures that the theater looked quite different. It had two doors instead of one, it had an all brick exterior and it didn’t have the little hood it has now. 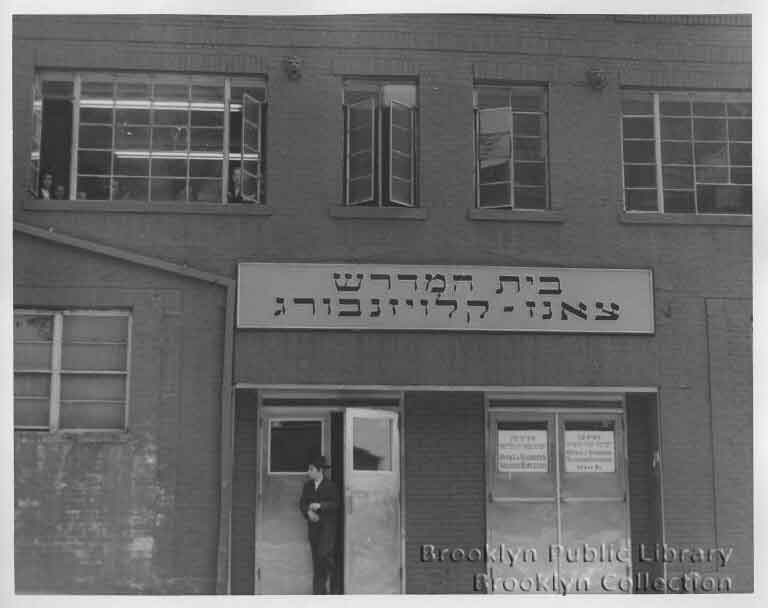 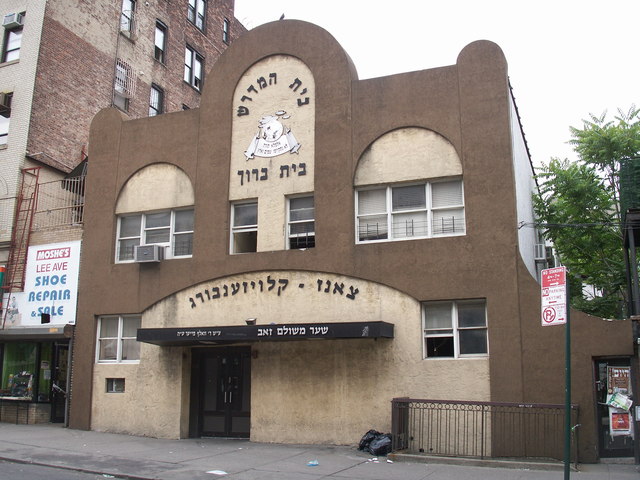 Inside, the building was completely renovated, but the synagogue room still shows some signs of its previous use. The two walls to the left and right of the entrance narrow toward the Torah ark where presumably the screen was, so the synagogue is not square. There are doors at either side near the stage. The entire Torah ark wall is decorated with marble, woodwork, and embroidery and is framed by Corinthian columns. I don’t know if the columns are new. The ceiling has some intricate off-white wood design all over it. There are fluorescent lights running all around the synagogue, where the wall and ceiling meet. But except for the stairs up to the women’s balcony, everything looks polished and beautiful.