I always ask my groups what the above pastries are. And invariably a few people will say “why, rugelach!” I ask if they know of another name for it, and not once has anyone ever said kipelach.

I asked Kaff’s Bakery what the difference between rugelach and kipelach is, and the cashier said that it’s the same; the terms are interchangeable. In our family, we used to call the above kipelach, and the below rugelach. I’d eat both interchangeably though. 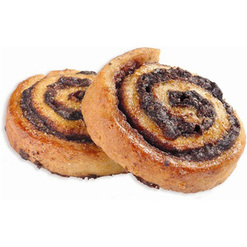 Actually, the origins of both names are worth looking at. According to the Nibble, “Its name [rugelach] comes from the Yiddish “rugel,” or royal, and it goes by other names such as kipfel (in Hungary and the Czech Republic) and horns of plenty (in non-Jewish areas of the U.S., where people “rugelach” may not easily roll off the tongue).”

However, I never heard of the Yiddish word “rugel”. For regal, we used a Hebrew adaption of malchusdig or maybe the Yiddish keniglech or prechtig.

The encyclopedia of Jewish food has a long entry on the kipfel:

“In Yiddish, the word kipfel came to specify crescent cookies, both leavened and unleavened, and not the croissant bread. One form of the cookies, nusskipferlin (nut crescents), still ranks among the favorite Ashkenazic cookies. Toward the end of the nineteenth century, Jewish immigrants brought the kipfel to America…

kipfele had a pronounced F that is no longer around in the Hasidic pronunciation, which is kipele.

In the 1933 Crisco Recipes for the Jewish Housewife, there’s a kipfel recipe. It calls for a lot of cottage cheese in the dough, something I imagine no one who makes Hasidic kipelach does. The pastry is described as “Hungarian half-moon cookies.” Here’s the recipe. The word “filling” is transliterated in Yiddish, already beginning the tradition of adopting English words to Yiddish. 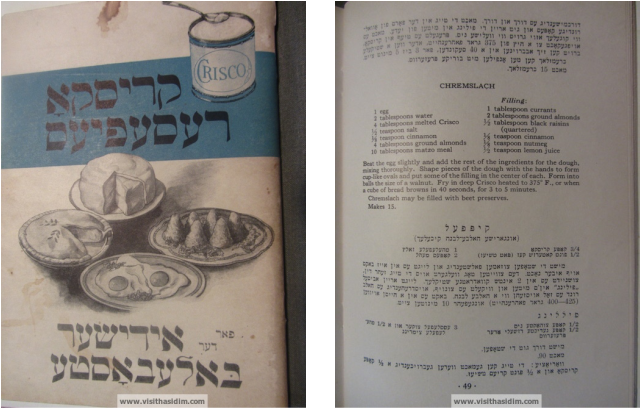 If anyone makes it, please email me the pictures of the kipfels and let me know how it tastes!