The future of the historic Hanover Club/Vien’s School?

Home > On the tours  > Buildings  > The future of the historic Hanover Club/Vien’s School?

July 30, 2014 The future of the historic Hanover Club/Vien’s School?

Posted at 20:33h in Buildings, History, Williamsburg by Frieda Vizel 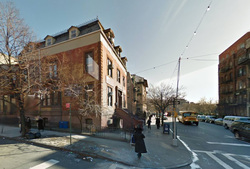 When a friend of mine was in Williamsburg late one night for a wedding, he explored the neighborhood a little bit, and told me that he stumbled upon the old Young Israel of Brooklyn I wrote about here, one of the important sites in historic Williamsburg, and had a conversation with the purported owner of the property. My friend learned from the owner that there are plans to renovate or demolish the Vien building and the Skver shul nearby and create one big building of the two old buildings, making use not only of the old spaces, but also the property in between. Here’s what my friend told me:

“I was in Williamsburg recently for a wedding at the glamorous Vayoel Moshe hall. As I hiked back to my car, I went past a building with rubbed out sign on the window: Young Israel of Brooklyn. Of course, I had to go in for a look. Even though it was close to midnight, the place was open and guys were loitering in the hallway. I looked around for a bit, and accepted a friendly greeting from one of the loiterers. As I was leaving, a guy came over to me and asked, “Did you grow up here” I told him no, I just like to look at a old synagogues. Turns out, he claimed to be the landlord of not just the old Young Israel, but the whole block, in partnership with the Square collective. He gave me the brief, buffed, history of the block, then took me next door to see the original Square Bes Medrash. He said he remembers when the walls were decorated with pictures of lions (!) and that when he was a kid in the fifties the place had 35 mispallalim, and that was Square.

Anyway both the old Young Israel and the historic first Square Bes Medrash aren’t long for the world. My new friend plans to combine the two structures and turn it into a modern synagogue complex. So say goodbye to two, historic old Jewish structures.”

I’ve done some research and I hear that there are indeed constructions plans to renovate the two historic buildings, but that doesn’t necessarily mean that they will be demolished. They may only be thoroughly renovated. I don’t know to which degree this is imminent and how much will change, but will share as I learn more.

bedford avenue, Buildingsofwilliamsburg, history of williamsburg, vien, young israel
“Williamsburg!” The iconic song by Yomtov Ehrlich
How my childhood was like the Rockettes