Home > Cartoons  > How my childhood was like the Rockettes

Posted at 18:25h in Cartoons, My Essays by Frieda Vizel 12 Comments 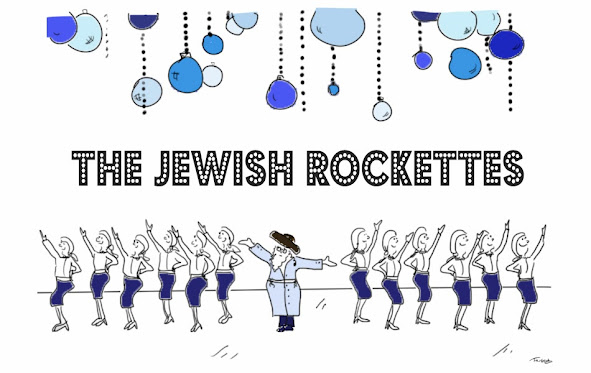 I often compare my Hasidic childhood in Kiryas Joel to the Rockettes. Yes, those gorgeous 6 feet girls who perform on Broadway and dance and kick in perfect unison — yes, them. That’s how I remember it felt.

Life in Kiryas Joel was many things; it was filled with female friendships, family, tradition, and constant stability. But when I try to articulate what affected me most in Kiryas Joel, I think about its discipline among women. It was like I was thrown onto the stage with these dancers. Kiryas Joel’s female population mastered perfect execution of societal choreography, self-constrained, uniform. We all didn’t look like these Rockettes below (or above), true, but all of my friends seemed to embody the same skill.

My all-girls classes were filled with well-groomed students ready to stand under the stage’s bright lights; to perform; to be perfect. The Hasidic community was the audience, they were all watching, the yentas and neighbors were eager to applaud or critique, and all we girls had to do was behave as we were taught. Everyone had the right postures, moved with beautiful precision, knew intuitively how to earn the approval of the crowd. They were not only modest; they were also as ‘spast, as was appropriate, and they were always “normal”, a standard that required execution of an indefinite number of rules. They could read social cues effortlessly and know without instructions what was right or wrong.

And then there was me. I was dancing with these Jewish Rockettes too, only I had no talent for it. I tried to dance; I more like bobbed; wobbled; flapped and yipped. I was as if short-legged and clumsy, always absent-minded and anything but a group person. I did not fit the costume at all and was an eyesore in the Hasidic girl’s uniform. As a younger kid, my thick blue tights often trailed out of my shoe in a giant tail so I spent half the day tugging the stocking’s waistline up to my buttocks. People said my hair was never brushed but I didn’t know how they knew or why it mattered, and my pleated skirt was more puffy creases than pleats. No matter how hard I tried to be a Rockette, disheveled tomboy I was, a Rockette I wasn’t. In this performance of religious behavior, my legs would never extend to the right length, my body would not deliver the right symmetrical movement, and my face couldn’t hold itself together with the perfect controlled smile. I was always forgetting what I was supposed to do, improvising, getting it right, getting it wrong, being weird, being silly, crying in public, laughing in public, doing things that didn’t belong on the Spectacular, raising eyebrows from the crowd, wanting to run off the stage.

I got suspended from school three times for being wild, behavior that was extremely shameful among mature girls. I was constantly in trouble. Every good or mediocre episode was a rare victory – a good report card, a pious prayer – and it was soon followed by a disaster; an inappropriate comment, troublemaking in class, just being scatterbrained.

I was always a sensitive soul and I internalized all of the criticism and let it eat at me. I spent much of my youth wishing I was like the others who were dazzling the crowd – good girls; great modest, help-at-home, mature girls – full of hope for their futures, making their mothers proud. I remember many, many nights in bed, curled up in my orange Spitzer’s nightgown, just hating myself. All I wished for was to stop being me.

My teachers, my parents, the neighbors, everyone cheered for my friends and sisters. “Spectacular!” they applauded. “Perfect! What fine, b’chaynt girls. What a joy to watch them!” and to me, they’d offer encouragement: “Be like that! Do that! Follow the script! You can also be a fine Rockette!”

I wanted to be a Rockette. I wanted it so badly; I believed I could be like the others if only I tried hard enough. I kept promising myself to try. I would control myself, I would be good. I would make my mother proud. She would be so proud. She would cry naches tears and then my world would shine. I saw my mother among this audience as she watched me, I heard her pray at dawn and I knew she davened for me to improve, I saw her hopefulness that I’d get it right, then her disappointment when I acted “crazy” or “not normal” and everyone judged me. I was often upset with myself, but never as much as when I sensed the disappointment of my sweet mother who prayed every day for things to go more smoothly for me.

I often wondered why I couldn’t get it right. As I walked Forest Road to the Shopping Center, I remember trying to figure out: what’s wrong with me? Why am I so weird? Why do I break out into a sudden skip, almost as if I was overtaken by a tick while walking in the street, when I was already a kallah meidel, big and grown-up, and should be “normal?” Why did I laugh to myself or sing to myself or talk to myself while normal people just kept it together, even faced? What was wrong? I knew that no one would ever hurt me and tell me if I was somehow born with a disability that made me so terrible at what I needed to do, so I had no way of knowing what the problem was. But it was clear to me that there was something wrong. Everyone was so amazing. Whatever was wrong – it was me.

For many years, I thought something was wrong. My hope was that I could fix it and make it right. It was years before I began to think that perhaps there was something different about me, and that difference does not mean wrong.

I learned to deal with my ruthless self-loathing by embracing the role of the clown and always being the butt of the joke. But I was never taken seriously, and I felt like no one ever saw ME, the me that I believed I could be, the me that was not *only* a bad Rockette.

People always ask why I left, and I have many answers. But to me, the question that boggles me is how I was ever there. Anyone could see: I am not made to be a Rockette.

I know that many of my friends in the Hasidic community will look at me and ask “Rockette what?” — and not only because Hasidim don’t know anything about Christmas dancers. Not everyone in the community experienced the social pressure as intensely or the discipline as constricting. Not everyone bolts at a whiff of authority or feels like they are in a straightjacket if they are ever told what to do. True, not everyone feels as controlled, but that didn’t make it any better for me. I look at the world around me and see that people are different, find meaning in different ways of life, and I respect that some people can be okay with the demand for conformity. Only I expect respect for people’s differences in return. There will also always be those like me, odd-balls and free spirits, individualists and adventurers, who were dropped by the stork at the wrong gig, who will always struggle with the feeling that they can never live up to what they were asked to perform on.

For those people, those Rockettes with short legs, I feel so much sadness. I do wish they’d be allowed to be themselves, that they wouldn’t be judged, or that they’d be let off the stage so that they would no longer measure themselves by a standard that is not for them. Because a Rockette with short legs can also be a girl with a great mind or a guy with great wits or a person with the unique quirks that make him or her special.

I know that I will always feel the pain that I failed as a Rockette, disappointed my parents, hurt all who had invested so much in my future. But I am glad that I left. I can now try to be good at other things. And I am even more glad that I can raise a child with the opportunity to dance any way he wants, freestyle, salsa, the tango, hip-hop, or even like a Rockette.

Sometimes, early morning in our home far away from Kiryas Joel, when the rest of the world is sleeping and the coffee is brewing and my son and I are still in our pajamas, we break into a silly dance of booty shaking and whirling and twirling and loopy jumping. Then I am happy. I am happy that despite all the hard times, I’m still dancing, with new moves and old moves combined. And that I dance to my own beat.

conformity, memories, personal
The future of the historic Hanover Club/Vien’s School?
An interview with Philip Fishman; author of ‘A Sukkah is Burning’