Hasidic couples get a wedding gift from their parents of an expensive bedroom set with two beds. Here are some pretty jaw dropping furniture sets from Chasuna Depot.

Hasidic couples have separate beds. One night chest in the middle. I lived like this for five years – although getting two larger beds rather than just tiny twin beds was just becoming a thing and I hadn’t caught on. We had two twins.

When a Hasidic woman has her period, her husband can’t come into her bed. In fact, he can’t touch her, pass anything directly into her hands, or even have a conversation that would lead to arousal. After her period passes she needs to count seven days of no bleeding. During this period she will change the linen set to all white, for both beds, just so it looks matching (duh!) and she will sleep in a white nightgown, white underwear. This is to make sure that she is really not bleeding anymore. She will even check twice a day to make sure she is clean using this cloth:

If seven white days pass, and all is well, the woman will go to the community mikvah/ritual bath. The mikvah is made up of many private bathrooms for getting ready, and a few pools for the actual immersion.

A pool. The second photo is a pool with the prayer on the wall. This is said before immersing in the pool naked. A female staffer supervises the immersion.

The bathroom and its contraptions:

You can press any of these buttons to call a female staffer:

Here is my beautiful Hasidic woman Mona Lisa drawn onto the mirror of the ritual bathroom. I sure hope I wiped it off before the attendant came. But you got to admit. It’s Arrrrrt.

After the woman finishes with the ritual immersion – about a two hour affair – she goes home, and her husband is permitted to join her in her bed. They can now be “together”. I was told before I got married never to go into my husband’s bed. This was because the man may come to associate his bed with arousal and feel this excitement even during the period of menstruation and separation. So the husband is always to congregate on the wife’s bed, but only if she has gone through the purification in the bath house. And if the couple wants to be frivolous when they are allowed to each other, they can not only have sexual congress but also stay in the wife’s bed to sleep the night together! Ooola-la. Assuming there are no babies wailing and the bed isn’t so narrow that one of them falls off in their sleep….

Bonus: some of my old cartoons: 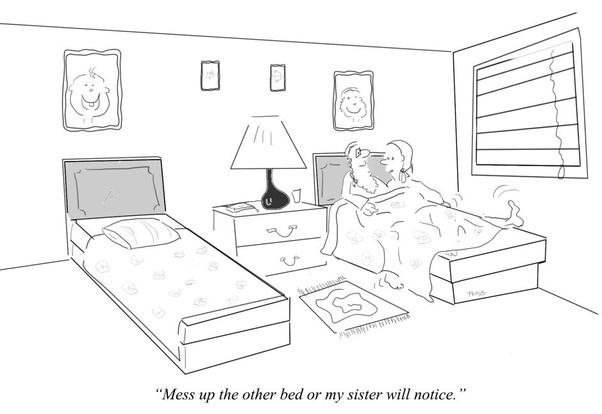 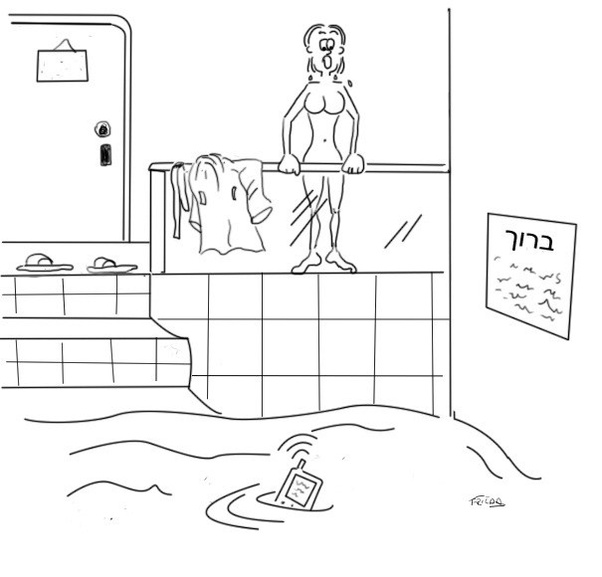 The Role of Hasidic Women

Mysteries of the Newlywed Couple’s Room

A Reply to Hasidic Men