07 Feb Why you should visit the Hasidic community in February

February is the slowest month for New York walking tours. It’s a cold and dreary month, the last bastion of the harsh winter, when all the January holiday travel is finished. The last of the winter tourism has gone into a bit of a lull before the spring season, as if to let us catch our breath before the fresh weather brings an onslaught of bookings and walks and umbrellas under the spring rain.

But all year round, I joke with my tourists that they should come to the Hasidic community especially in February. Sure, I’ve got goods to sell, I’m biased, and sure, it’s good to visit when our groups are small. Small groups feel like visiting town with acquaintances and having a good shmooze. But that’s not the main draw.

The really special thing about February in Williamsburg’s Jewish South Side is the blissful, beautiful, magical, romantic, absolutely enchanting absence of Valentines Day junk from the scene. There is no clamor of white-and-red gift bags, not a shelf packed with white bears clutching red hearts, not a Cupid with his matchmaking and over-promising, not an “I-love-you” or “Be-mine” preprinted on a helium balloon by a cheap Chinese manufacturer.

No consumerist agenda throws Valentine’s Day into your face again and again, that only he who shall pay the shekels to the corporations that churn out an unmanageable mountain of waste, only he is deserving of love. That’s because Valentine’s Day is forbidden in Williamsburg. The holiday is seen as doubly bad: It’s at once a gentile holiday and is also a holiday about sex and desire and carnal pleasure. (Should it only be this raunchy!) I don’t think I even knew of the holiday until I was an adult. Then I tried the big whop and got tired of it quickly. Now I’ve fallen in love with the absence of Valentine’s Day in Williamsburg, so I come to Williamsburg to buy myself kosher cherry balls and my tongue gets terrifically red, which happens to be the color of true love.

The Hasidic candy shop is, to an adult with an interest in cultures, a sociological candy shop, really. The things that aren’t sold are as telling as those that are. There are no products that express romantic love, there are no sexualized candy displays (think candy underwear, which seems terribly uncomfortable and best to tell the kids not to share that treat!). There are no Trumps and Elsas and Minions and political cults of personality (no rebbes either, thankfully), and also no scatological humor, like poop, toilet, flush candy, and other candy that is designed to steal your appetite and save you the cavities.

Instead, there is an assortment of loose candy, nuts, rows of fancy cut-your-own-fresh sesame halva, many many gift baskets for newborns. Lots of baby pinks and baby blues. There is some mazel tov paraphernalia: greeting cards and congratulations balloons and keychains. Many barrels of good nuts. There are even non-dairy chocolate bars that come in fancy wrapping that read “#1 husband” or “Keep calm and you’re the best wife,” or something very unsexy like that. There are even a rare few “I-Love-Yous” on the specialized lollipops, but I doubt those are even meant to be romantic. 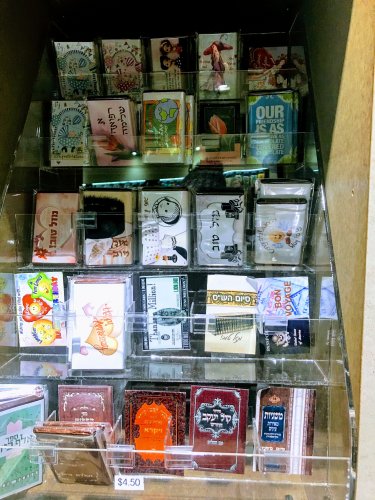 The toy stores and pharmacies likewise are without any such junk. I found one exception: an oversized teddy bear on display in one of the big toy stores holds up a heart that says “XOXO.” But that’s innocent: who says that doesn’t mean “play tic-tac-toe with me?” Such misunderstanding of symbolism crops up here and there in the shops, like one shoe store that has an Easter Bunny on display down to the eggs in his basket, or a designer clothing store that decorated its windows in rainbow flags and purple-and-blue flags, the very same flags you see waved around by tattooed and pierced gender fluid half-naked goyim at the Pride parade. Besides the unintentional, nothing.

But there is more: This year in February, the candy stores are busy with a different holiday that falls mid-month. It’s the minor holiday Tu B’shvat, or as it’s locally called, Chamish Assar B’shvat. It’s an occasion to celebrate, listen to this — the trees! It almost feels woke! Once a year in the Jewish calendar, there’s a New Year for trees with convening, eating, singing and praying for our fellow planet dwellers. To honor the trees, we eat their fruits, including exotic fruits and dried fruits and nuts. 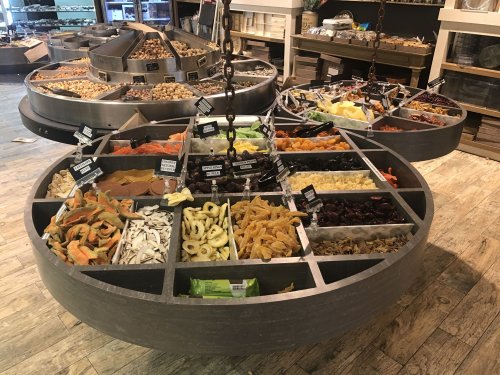 So now the candy shops are transformed into a party of all sorts of dried fruits, including beautiful flower arrangements molded out of the fruits, wrapped in cellophane, topped with a bow. Let’s be honest, it’s much better to celebrate the trees by eating a dangerous amount of prunes and sugar-packed dried apricots than by depending on your relationship status to be allowed to partake in any fun. Sure, all holidays are opportunities for businesses to push their goods, and the Hasidic community is also increasingly consumerist, but at least the holiday stands for something. The contrast between candy shops here and there made me think about how our ancient holidays were often mindful of something larger than ourselves, because humans felt so vulnerable next to the powers of nature. We might have moved beyond unscientific myths and we might have found ways to deal with some of nature’s destruction (might!) but we are still at the mercy of nature. I don’t think humility for the power of the world can co-exist with the intense individualism that has come to define Valentines Day. So I’m in Williamsburg with my small groups, enjoying the assorted nuts, having the best of both worlds.

Is the Hasidic Community a Cult?

Learn about Boro Park’s melting pot of influences from all over the world through its thriving culinary culture. Six food stops give you a taste of the scope of immigrant Jewish experience and the ways in which kosher food at once preserves history but also modernizes.

Try the German shnitzl, the Bucharan bread, the Hungarian sweet kokosh cake, Israeli-style schwarma, the Sephardic import of bourekas, an intense taste of Russia with herring, and an have a bite at an old American-style kosher luncheonette. Our food infused walk will take us down the main Avenues and shopping districts, and will pass some beautiful historic synagogues and storied buildings. A great choice during harsher seasons, with many more options to spend time inside.

All food stops are included in the tour price.

Dates: Once a month Wed at 1pm

Experience the weekly Shabbat meal in the form of a weekday walk through town! Our route will begin with the traditional greetings, and each stop will be another course in the ritualized meal. A terrific git Shabbes!

We start in the Hipsterest part of town and dive into South Williamsburg from its newer neighborhood, making our way to the spectacular waterfronts with delicious nibbles along the way. The tour is available on Thursday only, because it is the only afternoon that you’ll find challah, fish, chollent in the shops. The tour comprises a hand-picked ensemble of the best bites and the storied foods.

All food stops are included in the tour price.

Dates: Every other Thursday at 2pm

Private tours are arranged to specifically for your schedule and specific interests. This is a good fit for classes, religious groups, travelling groups, families, creative or academic folks researching Jewish Brooklyn, and anyone interested in a more customized program.

The typical private tour will follow the route of the Culture Tour: we walk the older part of South Williamsburg and loop from Lee Avenue back through Bedford Avenue, with a midway stop for pastries. But a private tour will be set up based on your time needs and it will not be open to other participants. Because this tour is exclusively for you, we can cover specific areas of interest in greater depth, like the history of Jewish Williamsburg, architecture, gender, economics, education, and more. We can also arrange for a tour by car or visit different neighborhoods, like the newer parts of Williamsburg and Borough Park.

GET IN TOUCH TO BOOK

Learn about New York City’s Hasidic community of South Williamsburg, a unique world in gentrified Brooklyn — so close to everything, we can even see the Manhattan skyline!

The tour meets near the Marcy Avenue train station for a meet and greet, and we begin the program with a brief introduction on the neighborhood history. We then walk down busy streets of mom-and-pop bakeries and old-school houseware shops, of Hasidic boys schools, of apartment buildings with staggered porches, of the big synagogue with its shabbes horn on top. I’ll unpack the values, technology, gender roles, economy, and marriage customs and take any question at all.

Two food stops and audio equipment are included in the tour price.

Sold out? Add me to the waitlist.

Complete the form to be added to the waitlist.
We will get in touch with you if we have room.

Learn about New York City’s Hasidic community of South Williamsburg, a unique world in gentrified Brooklyn — so close to everything, we can even see the Manhattan skyline!

The tour meets near the Marcy Avenue train station for a meet and greet, and we begin the program with a brief introduction on the neighborhood history. We then walk down busy streets of mom-and-pop bakeries and old-school houseware shops, of Hasidic boys schools, of apartment buildings with staggered porches, of the big synagogue with its shabbes horn on top. I’ll unpack the values, technology, gender roles, economy, and marriage customs and take any question at all.

Two food stops and audio equipment are included in the tour price.

Dates: Sunday at 2pm and Friday at 11am

Sold out? Add me to the waitlist.

Complete the form to be added to the waitlist.
We will get in touch with you if we have room.

Thanks for signing up for the waitlist. We will email you if we have room on the tour.

Thank you for signing up.

Thanks for your request. We will reply to you as soon as possible.

While I think nothing compares to being a visitor in the Hasidic community, I have found that the tour travels well. I can bring my presentations, rugelach and other materials to your class or community or home for the traveling tour. I’ll be the tourist, for a change!
Please contact me to discuss.

Surprise your friends and family and have a Gift Card delivered directly to their inbox.