Anatomy of the Hasidic Yiddish newspaper

Hasidic newspapers are an integral part of the system of insular messaging, and the way they relay world events reveals a lot of the culture’s values, priorities, and systems of censorship.

The newspaper industry is not experiencing the same decline as the modern media industry is, for a number of reasons:

A great illustration of how central print media remains in the Hasidic world, while it largely disappears outside of it, is the newspaper stand inside the deli next to the train station. This is not a Jewish deli. It is a typical busy-street NYC bodega staffed by men who speak Arabic, but they sell Yiddish, Hebrew, and English print materials for the Jewish community. They sell not only regular fair found in Williamsburg, but also more “modern” or slightly dissident stuff that Hasidic shops won’t sell, but which only Hasidim buy — on the down low. This bodega’s newsstand has almost exclusively papers and magazine for the Hasidic community, with a few New York Times at the side serving the larger public. The entire shelf space at the window is for Hasidic patrons.

There are three main Hasidic newspapers, and they publish their paper weekly, on Wednesday and Thursday, so it will be fresh for shabbes.

Der Blatt and Der Yid are the two partisan publications that are affiliated with the rivaling factions of the Satmar sect. The succession rivalry between the two Teitelbaum brothers led the Satmar sect to split in two, and the Aaron faction (shown first here) renounced Der Yid and established Der Blatt. Der Yid is the official paper for the Zalmen faction. 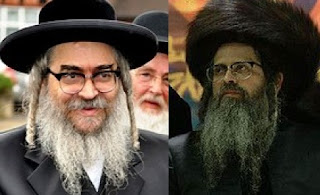 Di Tzeytung is not Satmar affiliated. It is a general Hasidic newspaper and predates Der Yid.

The media reports on only a select number of things that you might find in a secular newspaper. There are a lot of community-specific things in the papers, but from the wider world, the coverage includes:

Here’s an excerpt from the emailed-daily newspaper of Der Yid. The coverage includes stories about Germany and antisemitism, as well as Biden’s cancerous growth.

When compared to the secular media, there are striking differences. In contrast to Der Yid, the Daily News has many other topics, a lot more racy images, and a different way of portraying events — more dramatically and more focused on the personalities experiencing events. The Daily News contained the following categories:

Besides leaving out lots of topics that are covered in mainstream news, the Hasidic newspapers often also have to deal with topics like “politics” involving sex and scandal. This, for example, was the story with Brett Kavanaugh’s supreme court confirmation. As I wrote at the time, the newspaper covered it, but with giant omissions. At no point were sexual impropriety or Ford mentioned in the story below. It was turned into a story of political jostling among senators.

In general, the Hasidic paper includes almost no pictures of non-Hasidic people. Most of the news is relayed in pure text. Pictures can be trickier to censor than text.

The paper usually has a special picture section, where photos of world events are shown. Here too, there is a great effort to avoid showing pictures of people.

The effects of telling the news without showing faces and telling the personal stories of the people impacted are significant. The news becomes a lot more removed and a lot less sensationalist when the individuals involved are not humanized and dramatized.

Sometimes pictures of people are shown, but never of women. In 2011, Di Tzeytung famously got in trouble for cutting Hillary Clinton out of a picture of the situation room.

It’s even in their Wikipedia page! It was a huge scandal at the time.

They were forced to apologize and explained that they have a “long-standing editorial policy” of not publishing women’s images. It explained that its readers “believe that women should be appreciated for who they are and what they do, not for what they look like, and the Jewish laws of modesty are an expression of respect for women, not the opposite.”

A few years ago, yours truly was mentioned in this newspaper, in a letter to the editor.

There is a tour in Williamsburg that is led by a woman who was “rotten” [left the sect]. She still remembers the Jewish way of life, but as she is someone who gave up the Hasidic lifestyle of her family, it is obvious that she will of course say bad things, twist everything, in order to justify her rotten way of life.

Well, well! A woman in the newspaper, it must be an honor!

The Hasidic newspapers also often run outside advertisements, like the ads for political campaigns or for governmental vaccine drives.

An overview of Hasidic entertainment #3: News, Leaflets and Mags

How the Hasidic Community Votes