The Senate unanimously signed a bill today making it a requirement for all bathtub manufacturers to attach a product warning to caution users not to throw away the baby with the bathwater. The bill passed the House late last week and is now on the President’s desk. Obama made it clear that he will sign the bill into law immediately and that there will be no revisions to the bill language to ensure that there is no delay. 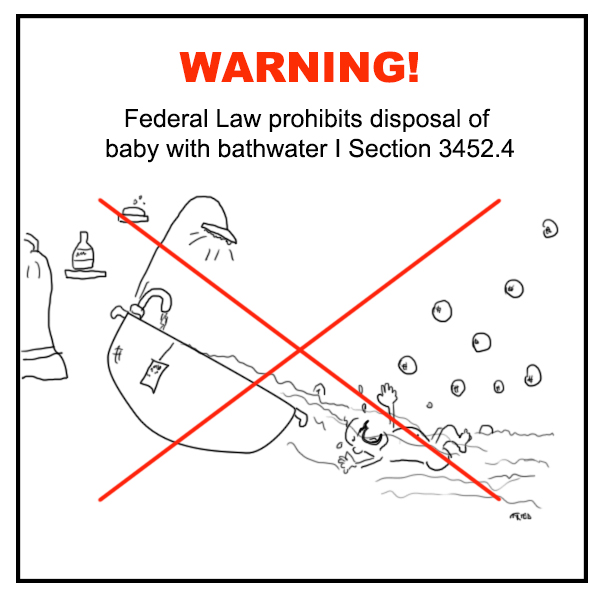 The urgent appeal for this new mandate was brought to Washington’s attention after many years of human rights lobbying to stop the tragic incidents of babies being thrown out together with bathwater. “There are unfortunately lazy folk” said the author of the bill, Senator Richard DeMint, in an exclusive conversation with Oy Vey Cartoons, “they empty the tub and with it the baby and they continue to use the tub for the next baby, etcetera. Americans can no longer ignore this waste. I am proud that we were able to come together today in a bipartisan vote on this important issue that concerns the wellbeing and prosperity of this great country. I promised the people from my state that I will eradicate this practice. Today, I delivered to the people of Minnesota.”

The exceptionally quick turnaround on this law was prompted by the tragedy last week in Brooklyn, NY, when a woman was arrested for throwing out her baby with the bathwater. The call came to the 91st precinct of the NYC police from an unsuspecting neighbor, Mrs. Blumenkrantzenholzenburgenboym, who was on her way to the wig maker when she noticed her neighbor Sury Green, age 32, emptying her tub and her baby in her backyard and then leaving the premises. “I looked out from my snood,” said a visibly shaken Mrs. Blumenkrantzenholzenburgenboym, “and saw that poor baby lying there in the dumps! I was horrified and called 911! Thank God the cops came and took matters under control immediately!”

Sury Green is held in solitary confinement in the La Guardian Penitentiary with no bail, and is said to have her first hearing next week. Our telephone calls to her cell were not returned. In a call to her lawyer Mordy Greenblatt, Greenblatt confirmed the charges of second degree manslaughter and said that Sury will plead not guilty because she does not have a baby or a bathtub.

Senator DeMint contacted the family last week as the new broke to express his condolences and to promise to move forward with legislation to ban this practice. He flew in for a private meeting with Mrs. Blumenkrantzenholzenburgenboym where he listened to her first-hand account of the tragedy and gathered the information necessary to formulate the bill.

As the two left the meeting they stood for photo ops and then spoke a few words to the gathering crowd. “May God save the babies,” said DeMint, as he entered his limo with eyes red from obvious crying. “And may God bless America.”

Reporting by: Frieda Vizel/Bathtub, NY. Hand me a towel, someone!

Frieda Vizel left the Hasidic community, the Modern Orthodox community and the Formerly Orthodox (OTD) community. She now lives in Pomona and is actively looking for a new community to leave. She deals with the perplexities of the communities she left by drawing cartoons about them, a habit that gets her into an excellent amount of trouble.

Sorry, the comment form is closed at this time.