May 27, 2014 A list of Hasidic female headgear, with illustrations

Hasidic women customarily wear a head covering after they get married. There are various types of head coverings, and each type is different not only in appearance but also in the degree of stringency. Yet the headgear doesn’t really reflect a woman’s piety, because it is determined by what the family tradition is. What the mother wears, the daughter wears. On occasion, a woman may choose to deviate from the family headgear. Or it can happen that parents agree on a different headgear at the time the marriage is arranged, per the engagement negotiations. I think it is fair to say that a family’s headgear is a factor (among other factors) that is taken into consideration when a match is arranged.

Of course, headgears have gone through many changes in the world of Hasidic fashion. While the main elements remained constant, hat styles, wig styles, and scarf styles have varied widely over the years. It is interesting to note that in Hasidic vocabulary people often refer to families based on headgear tradition. For example “they are a hat family” is a description of a family if the mother and married daughters wear hats on top of their wigs. That’s because headgears reflect a socio-religious status in the community. Any family that wears any type of scarf headgear (there are a few types, see below) can be a “tichel family”, tichel being Yiddish for scarf. That’s the family I grew up in, and it was the costume I wore after my marriage.

While some sects are likely to have more of one headgear than another (i.e., the shpitzel would be more common in Satmar and a frisette in Skver) the headgear does not symbolize affiliation with a particular sect. Headgears are generally worn outside of the house. At home or near the home, women wear the more comfortable turban or pre-tied scarf called a bandana. These turbans/scarves/bandanas are chosen to fashionably match the woman’s housecoat.

Note: I’ve tried to organize the list of headgear by the degree of stringency, from most stringent to least stringent. If there were slight variations in the headgear style that do not reflect variations in stringency, then I did not give it a separate entry, in order to make it clear that the piety level is equal. (And even with this degree of detail, we are still not covering everything. There’s more to say about headgear on holidays versus weekdays, but we are now covering the hierarchy of socio-religious head coverings)

Plain Black Scarf: This woman wears only a black scarf. This is very Israeli and is not common in Williamsburg.

Plain Print Scarf: This woman wears only a printed scarf tied over the head. There is often some sort of stuffing, to give the head-covering some oomph.

Shpitzel: This woman wears multiple layers. The first layer is a net over her head, with some type of weaving at the net’s edges, to frame the face from ear to ear. There’s another layer of turban liner for height, and a scarf on top of that, which is tied in the back and kept in place with pins. The scarf is often silk, fashionable, and of designer label, and it is folded so the desirable colors show in the front. 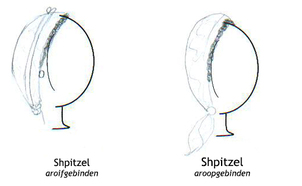 Shpitzel and a Hat: This is rare. I think this is mostly only worn by women from rabbinic families whose costumes are often somewhat different than the rest of the populations’. The ensemble is that piece of shpitzel weaving with a hat on top of it.

Front  Frisette: Interestingly, the term frisette seems to originate from the French frisette and is indeed similar in style. The first layer is a short wig with bangs or another style of wig above the forehead. Here, only the front of the wig shows. This layer is followed by the same elements of the shpitzel: a turban for height, and a scarf.

PS: This is the headgear I wore.

Front/Frisette with a back: This is the same as a frisette, but instead of just showing a wig in the front, we see the wig in the front and back. I’ve seen many of those in the town of New Square where the Skvere sect is headquartered, but very few in Kiryas Joel.

Wig and a Hat: This is a short wig with a stylish hat on top. Only the front and sides of the wig show.

Sheitel and a Hat with a back: Here the wig shows in the back as well, although some women will show only an inch while others will show a few more liberal inches. The wig often goes behind the ears.

A Snood: A full wig with a very wide headband that covers most of the wig.

A Band: A full wig with a regular headband.

A Hoyle Sheitel or Uncovered: A wig with no covering.

The last is considered a very liberal headgear in Williamsburg, and women are often asked not to enter a synagogue uncovered.

In Williamsburg wigs (especially the covered wigs) are usually a blend of synthetic and human hair and they only come down to the shoulders.

On women shaving all their hair